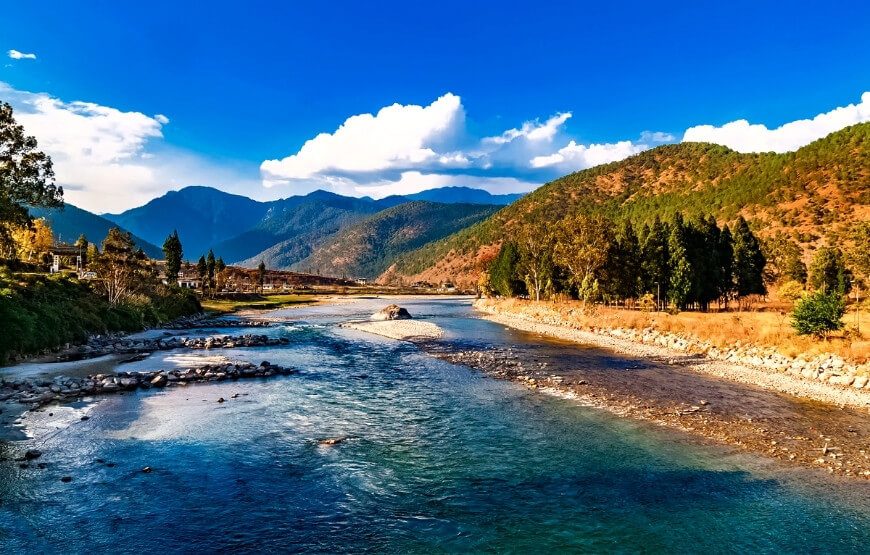 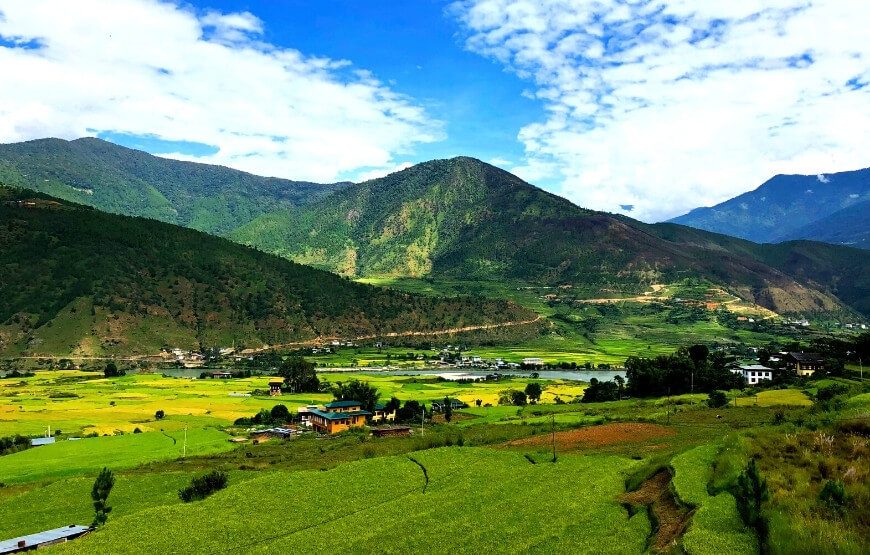 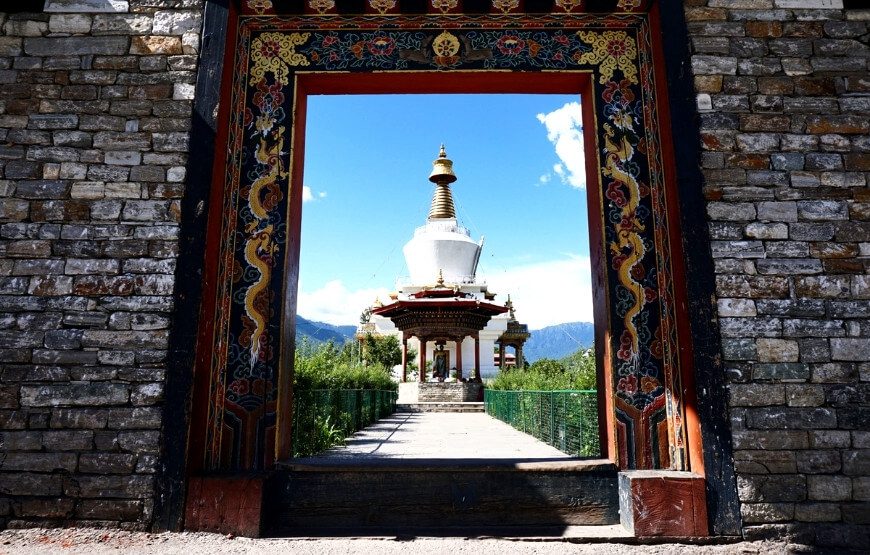 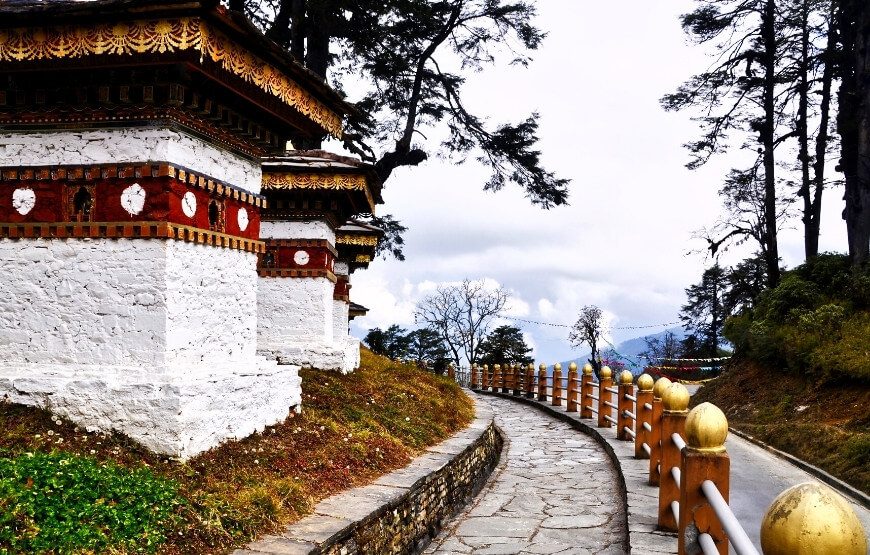 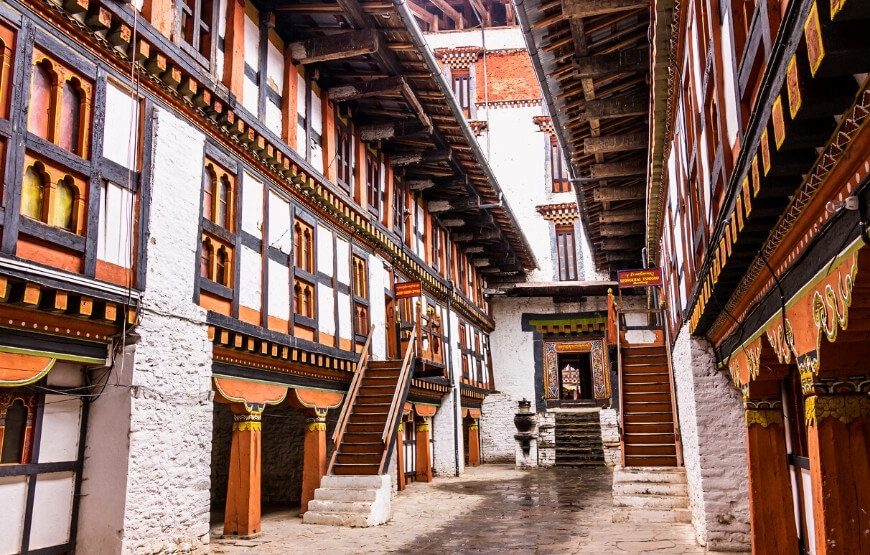 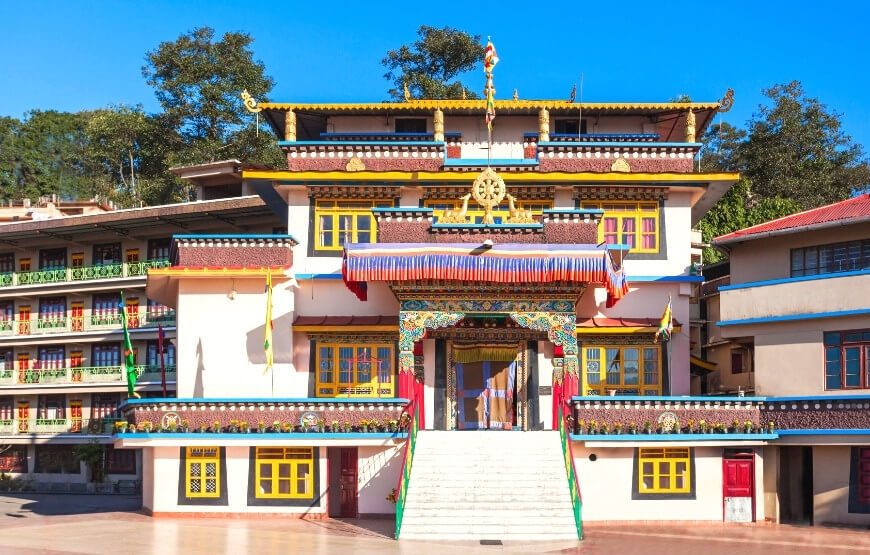 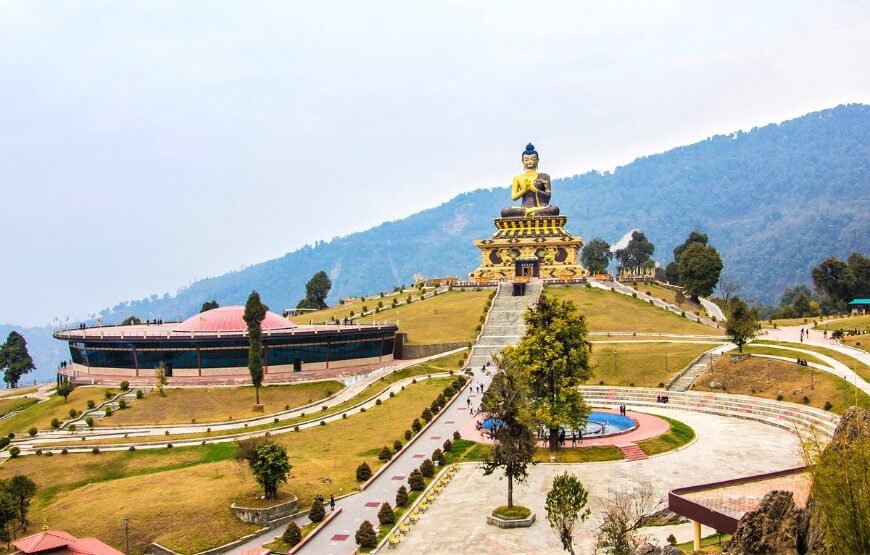 The most spectacular mountain flights you will ever experience in a life time. Flying in from the heat of the plains of India one can witness from the left side of the aircrafts window a series of the world’s highest peaks. Your pilot will announce the names of the peaks if the weather is clear. You will descend into the high mountains and as the plane lowers you will not find any airstrip or any city but instead you will enjoy the view of the approaching valley of Paro, the alpine forests, little monasteries, temples and farm houses. Before the plane touches the runaway you will get a glimpse of the fertile valley of Paro, the Paro Dzong and Paro chu(river). Our representative will be at the airport to assist you, meet and greet and transfer to the capital city Thimphu and rest of the day at leisure. O/n at Thimphu.

When in Thimphu you got to prepare for surprises where this unique capital has no traffic lights but adopted its own version of the British – Indian colonial times traffic policemen who can startle you and memorize others with his elaborate hand gestures, sometimes he may be signaling stop when it looks like go but don’t worry you can observe the flow and notice his smile as you stare at him. Sightseeing includes visit to the National Memorial Chorten a stupa dedicated to the third king of Bhutan and Buddha statue, Takin Zoo where you will find national animal of Bhutan and drive down hill stop at the junction to take a glimpse of Trashichho Dzong. Proceed towards National Library and Folk Heritage Museum. Afternoon take a short walk to Handicraft Bazaar to view the traditional arts or take a walk to the main city from Clock tower square for shopping.. O/n at Thimphu.

Morning drive to Tsirang district in the central south region via Dochula pass 10,000 ft and on the stop at Hongtsho village. Stop at the immigration check point to stamp in your permit. Next to the check point you will find small local stalls selling fresh juicy local apples available for sale in plastic bags you could try some. You will be driving through the first mountain pass in the western part of Bhutan. You will find the 108 DrukWangyal chortens on the top of the pass where the ridges are draped in colorful prayer flags greet you. You could take three rounds and offer prayers, take some best photo shots. If the weather is clear you will be able to see the highest peaks towards the north, GangarPunsum among others is the highest unclimbed peak (24,000 ft) in the world. Proceed towards Wangdi bridge and on the left side of the hill you will find Wangduephodrang Dzong which is under going construction.

Damphu may have been derived from the word “dhungphu”, meaning ritual horn cave. Some people say the name of the town Damphu is a derivative of the word. Hence the name of the Damphu Nye, named after finding the imprint of a pair of “dhung” (ritual horns) on a rock inside the cave. To the Hindus, Damphu Nye is known as Mahadev Thaan, the place that is blessed by the Hindu god Lord Shiva Shankhar. Tsirang is known for its gentle slopes and mild climates which falls under sub-tropical region. The district is also noted for its rich biodiversity and is inhabited by Lhotshampa. The altitude ranges from 400 to 2000 meters above sea level and area 638.3 sq.km. Approximately 58% of the land is under forest cover comprising mainly of broad-leaf and chirpine species while 42% is under agricultural cultivation. Favorable as well as diverse agro-ecological features provides the district with the potential for cultivation of many different types of cereals as well as horticulture crops and organic products

Proceed towards Wangdi bridge and from this point you will be following the Punatsangchu river one of Bhutan's longest rivers, the PunatsangchuChhu or Sunkosh river flows through the district and at the moment hydro power construction is going on the road maybe little dusty. The 2 minutes’ drive through the tunnel will fascinate you and is one of its first kind in Bhutan. Upon reaching Wakleytar bridge you will be entering Tsirang region which has been opened recently for tourist. Not many tourist have visited this place and on the road if you are lucky you may come across Red jungle-fowl, golden langur it has a black face and a very long tail measuring up to 50 cm in length. We stop at Birichu and look out for some organic products displayed for sale by the local people living in that region. Drive further crossing Chachey bridge and from here the drive will be uphill with change in landscapes. We stop for a while at the view point called Hawadara and enjoy the view of the other district Dagana on the other side of the hill divided by the Sunkosh river. During the months of Dec - Jan you will find lot of oranges and the entire village looks colorful, you could purchase and try some of the juicy oranges and take some photo. Check in the hotel and evening enjoy the sunset and view of the villages and mountains from your hotel room. O/n at Tsirang. (Accommodation in Tsirang will be with basic facilities comfortable King / Queen size beds, attached bathroom with hot & cold water, room heaters & local food, Indian cuisine)

Morning take a short drive to Damphu town and visit NamgyalcholingDratshang established in around 1985 as the center for all religious affairs of the district. The main building of the Dratshangcomprise of three storey chambers. According to KudrungRinchen, the Dratshang is blessed with a precious “ringsel” (body relic) and “tsem” (tooth relic) of ZhabdrungNgawang Namgyal, considered as one of the most sacred “nangtens”. In the middle storey lies the statue of Lord Buddha and the walls are painted with the depiction of Lord Buddha’s “ZepaChungyni” or the twelve deeds of the Buddha. The top floor is the “goenkhang”, which houses the altar of the local deity YuilaZatsen. Spend some time at the park and enjoy the view of Tsirang Dzong, one of the recent dzongs constructed during the reign of our present 5th HRH King Jigme Khesar Namgyal Wangchuk. The Dzong is presently used as the district administration office. Afternoon drive back the same road towards Punakha and check in. O/n at Punakha.

Morning visit the majestic Punakha Dzong placed strategically at the junction of the Pho Chu and Mo Chu rivers, the dzong was built in 1637 by ZhabdrungNgawang Namgyal to serve as the religious and administrative seat of the region. It was here that the dual system of government was introduced in the 17th century and in 1907, enthroned the first King GongsarUgyen Wangchuk. A short walk through the villages to Chimmi Lhakhang - The divine madman also known, as Drukpa Kinley is a famous teacher with whom the phallic symbol is associated. Do not miss the master’s deeds painted on the walls. Japanese and several American couples visited this temple and were blessed miraculously with children. Afternoon at leisure. O/n at Punakha.

Morning drive to Paro same road via Semtokha entering the Babesa express highway. Upon reaching Chuzom check post, stop for awhile at the bridge, stretch your legs and walk through the bridge. Proceed towards Paro and check in the hotel. Rest of the day at leisure. O/n at Paro.

Morning visit Paro Dzong, the National Museum housed in a round fortress called as the Ta Dzong considered to be one of the best natural history museums in Asia where it has a fine collection of natural and historic artifacts, Paro Penlop Heritage Farm house, Kyichu Lhakhang the monastery dates back to 7th century and is one of the oldest and most sacred. Afternoon visit ruins of Drukgyel Dzong and drive till the base of Tigers Nest. Evening at leisure. O/n at Paro.at leisure and evening visit the town for shopping. O/n at Paro.

Morning transfer to Paro International Airport for your next destination.