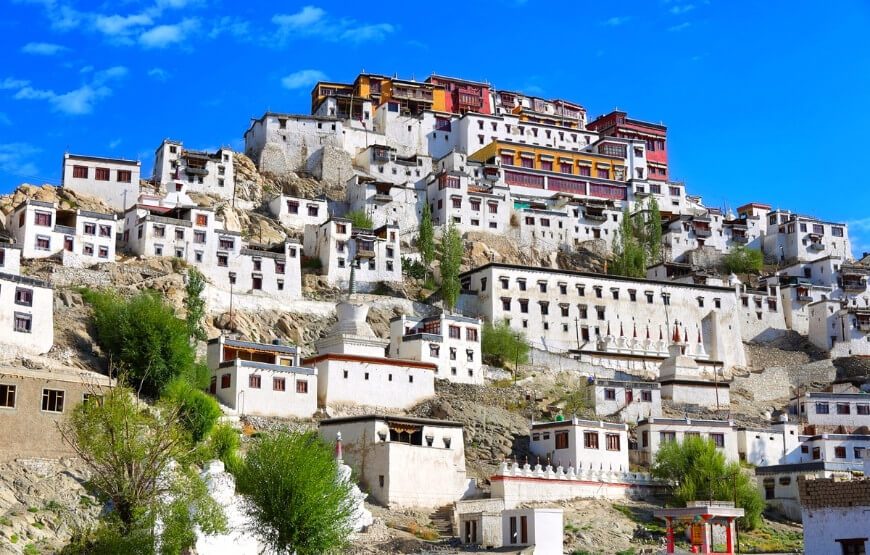 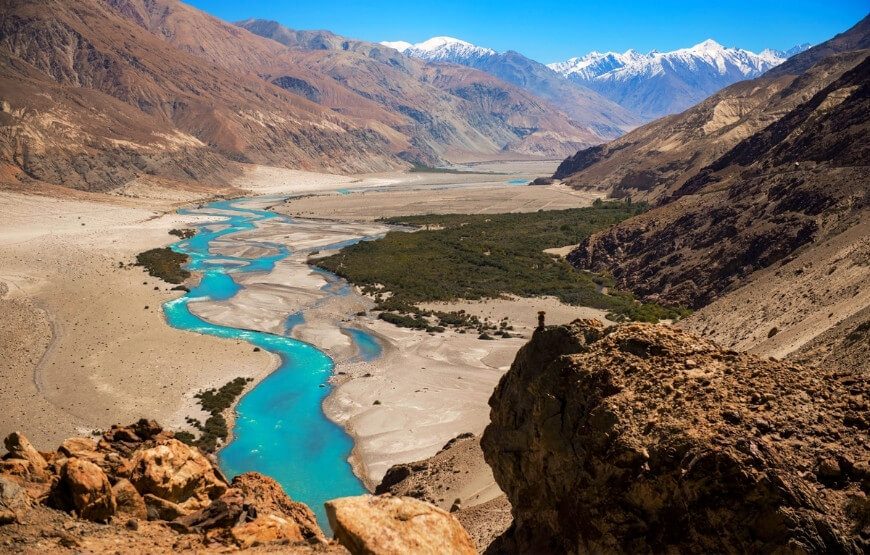 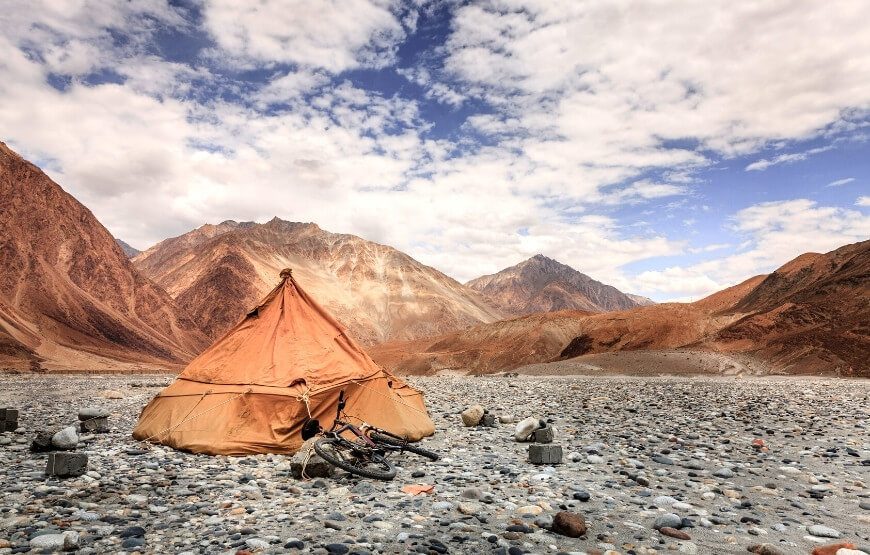 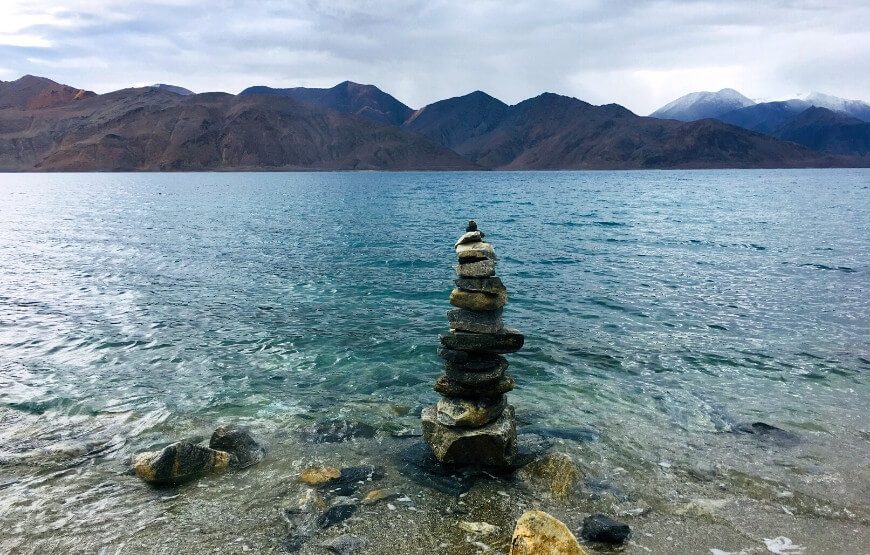 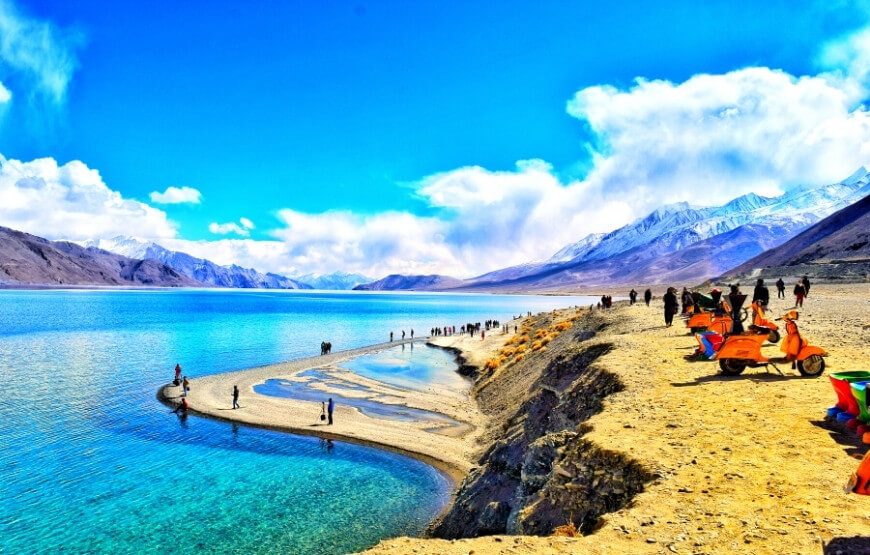 On arrival at Kushok Bakula airport Leh - 3500m above sea level you will be transfer to hotel and check in. Full day at rest for acclimatization. Lunch & Dinner and overnight stay at the Hotel in Leh.

Day start with Hall of Fame, which was constructed by the Indian Army to commemorate the sacrifice of soldiers during Indo-Pak wars , Kali Mata Temple, followed by Spituk Gompa - an 11th century structure , Next on the list of attractions is the majestic Gurudwara Patthar Sahib. Nestled deep in the Himalayas, it was constructed by the Lamas of Leh in 1517 to honour the visit of Guru Nanak Dev - the founder of the Sikh faith. Drive another few km to witness the magic of Magnetic Hill that defies the law of gravity. It has been noticed that when a vehicle is parked on neutral gear on this metallic road, it seems to slide up and further. Driving through a picturesque landscape, we reach the confluence of the Indus and Zanskar River. Proceed back to Hotel for Lunch . Evening drive to visit Shanti Stupa, a Buddhist white-domed Stupa on a hilltop in Changspa, It was built in 1991 by Japanese Buddhist Bhikshu, Gyomyo Nakamura and part of the Peace Pagoda mission. Later visit Leh Palace. In the evening walk around local market Dinner and overnight stay at the Hotel in Leh.

Today at morning drive to Nubra valley, driving over the highest motored pass in the world. The exciting journey through serpentine roads lead you to the Khardungla Pass at an awesome height of 5550 meters. We stop at the pass to admire and click some photographs of the fantastic view. The valley is situated on an old caravan route at the confluence of the Shayok and the Nubra rivers. On the way visit the charming valley, of Deskit – the tiny capital of Nubra. We will visit the Deskit Gompa, perched on a rocky spur above the village, with a commanding view of the entire valley. At Deskit Monastery you will visit 106-feet high, statue of Maitreya Buddha atop on the hill. The monastery has intriguing images of many deities. From Deskit we will drive to Hunder past an area of sand dunes and get acquainted with the famous Bactrian camels, small population of shaggy double-humped animals, which in the old days, were used as pack animals on the Central Asian Trade routes are now used as riding animals in the high deserts. We will ride the double hump camel at hunder on direct payment basis. In the evening we will drive back to the camp/hotel. Dinner and overnight in camp/hotel at Nubra.

One of the most fascinating journeys in Ladakh this is a less popular destination recently opened for tourist, if you have a thirst for a beautiful location this is the place. En-route spectacular mountain ranges and Villages like. This region is controlled mainly by the Ladakh Scouts a rear department of the India Army. A border village that was recaptured by the Indian Army in 1971. Locals have relatives across the border (Line of Control) and depend mainly on farming of vegetables, apricot besides providing mules and porters. Baltistan a beautiful village with charming people "On the night of December 13, 1971, the people of this village went to sleep in Pakistan. The next morning, they woke up in India." We are in Turtuk, listening to a villager recount the history of this remote northwest corner of Ladakh, which until that night was part of Baltistan in PoK. A full day rough excursion and evening back to Nubra Valley. Overnight in camp/hotel at Nubra.

After breakfast at camp/hotel we drive to next destination Pangong Lake (situated at 14, 500 ft above sea level) via Shayok and onto Tang Tse and Spangmik (Pangong). It’s a short cut and it's a beautiful route. The road follows the Shayok river, and climbs up a mountain before finally descending into Shayok village. It takes less than an hour to reach Shayok, and you will be delighted at the sight of the rather big village surrounded by barren mountains, the entire setting being very picturesque. Afternoon we reach at Pangong Lake and enjoy your day at Pangong Lake. Dinner and overnight stay in camp.

After breakfast leave for towards Tsomoriri via Chushul village and Merak village, drive along with beautiful Pangong lake and we can catch wild ass (Kyang ) and few birds like Black neck crane , Brahminy dark and sea gull and Chushul monastery , Chushul is one of the four officially agreed BPM (Border Personnel Meeting) point between Indian Army and People's Liberation Army of China for regular consultations and interactions between the two armies, which helps in defusing face-offs. we can view the army post from long way , since general public are not allow nearby , then via Tsaga -La (Pass) and Loma and further towards Maha Bridge the main checking point to enter to this new area. On the way visit Sumdah village and another 55 kms drive will take you to Tsomoriri. The Tsomoriri Lake is the breeding ground for numerous species of birds, like the bar headed goose, crested grebe, the Brahmini duck (ruddy Sheldrake) and the brown-headed gull. The Tsomoriri Lake is 8 kms wide and 28 kms long. visit Korzok village and visit around the lake Spend the night there in the tent. Overnight at Camp.

In the morning visit Korzok village and visit around the lake. Later drive towards Mahe village. The village is famous for the scene of shooting fountain and white clouds hanging upon. Drive to Puga valley and you can witness well-furnished Govt School for student from nearby nomad villages. Spring at Puga village is famous for Butan gas. Later we drive to Tsokar visit the Lake, which is at an altitude of 4090 mts, and continue drive to towards Leh via Tanglang pass, which is at a height of 5350 mts and is the second highest motor able pass in the world. drive back to Leh.. Overnight stay at hotel in Leh.

After a leisurely breakfast, we drive to visit Hemis Monastery situated 45km west of Leh, Hemis is the largest and the wealthiest monastery in Ladakh. From Hemis, you are driven back taking the same route to visit Thiksey Monastery, located on a hill-lock with formidable views of the Indus valley. Thiksey is especially noteworthy for its gigantic seated statue of the Maitreya Buddha and is also known for its (Dukhang) assembly hall which houses hundreds of rectangular prayer books, stacked between wooden covers and bound in silk. After that we continue to drive through series of chortens to visit Shey Palace the former summer palace of the King of Ladakh. Sindhu Darshan and Shanti Stupa visit. Overnight stay at the hotel.

On time drop at Leh Airport and fly back to own destination with beautiful memories.

Being a group tour package, the departures will be operated on meeting the minimum operating strength of 10 passengers. Otherwise, passengers will be given an option of shifting to another operating departure or continue on the same departure by paying the private vehicle supplement as applicable.